Home » Get Ready, Because Flamethrower Drones Are Going on Sale Very Soon

Get Ready, Because Flamethrower Drones Are Going on Sale Very Soon 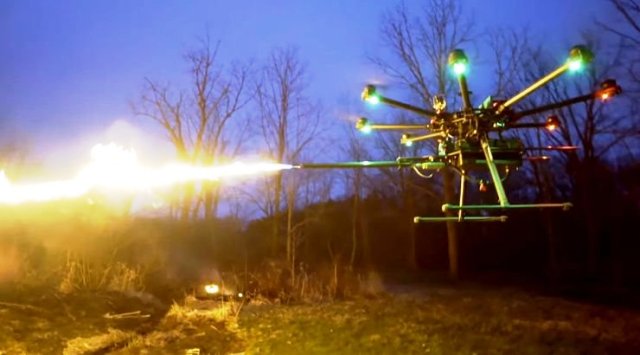 Considering that extreme and growing heat is one of the biggest problems facing human society today, it would be safe to assume that the last thing we need is more fire in our lives.

But who are we fooling? Fire has always been an inseparable part of what makes us human, be it as a means to make food edible, a tool in battle or, according to Sigmund Freud, an element that’s been a key point of origin for most societies.

And now, the Throwflame company—which bills itself as the “oldest flamethrower manufacturer in the U.S.”—is hoping to extend the burn to those hard-to-reach spots just begging to be scorched.

And what better way to do so than by releasing a fully-functional flamethrower unit that can be attached to flying drones?

According to the Verge, Throwflame’s TF-19 WASP is a new fiery appendage that will allow any commercial-grade lightweight lift drone with a payload capacity of five pounds to spit fire as far as 25 feet away. The TF-19 will also be equipped with a one-gallon fuel tank capable of streaming out a steady jet of fire for up to 100 seconds, ensuring that anything targeted by the WASP will be burned to oblivion.

What else would you expect from a company that advertises itself with the tagline: “After all, we too love the smell of napalm in the morning”?

Needless to say, this fire-breathing infernal flying machine comes at a cost. The WASP will be sold for $1,499—a price that may seem steep for some, but may be a steal for certain specialists whose vocation relies on fire.

In a promo video released by the company, the WASP is seen spewing fire from a DJI S1000 drone with an A2 flight controller, 6S 16,000mAh LiPo battery and a TBS Tango R/C remote, which the Verge estimates “could easily add another $2,600 to the cost”—and that’s without attaching an optional GoPro-style camera to the drone.

But the TF-19 isn’t just for shits and giggles alone—Throwflame suggests that the drone is just the right solution to a number of problems ranging from controlled agricultural burns to “ground clearing, snow and ice removal, incinerating weeds and pesky insect hives, pyrotechnic events and movie props, firefighting and training, (and) grassland management.”

Yet company founder Quinn Whitehead also admitted to Gizmodo that around half of its customers are recreational buyers just looking to play with fire.

“It’s definitely a unique concept … but any new technology is a little bit scary at first.

You think back to when drones first got commercialized and popularized—they were cheap enough for the average person to buy—there was a lot of concern about privacy issues and people flying them all over the place, and swarms of drones blocking out the Sun.

But in hindsight, it’s kind of an overreaction I think.”

Fair enough—we won’t see flying drones spitting fire at our local parks any time soon. But then again, we wouldn’t be surprised if federal and local governments changed the law to prevent consumers from satisfying their desire to literally rain fire wherever they please.

Next post: How To Physically Integrate Your 5D Lightbody