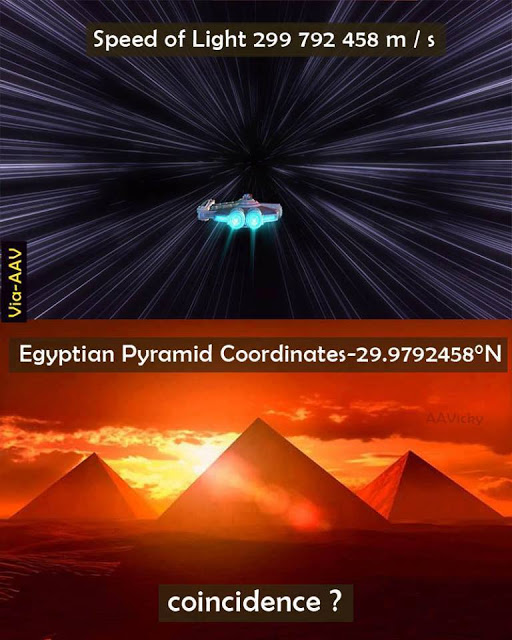 C= 29.979 Pyramid Coordinates Equals Harmonic Of Speed Of Light!
Is it a natural phenomenon or is it a grand coincidence,
that the coordinates of the Egyptian Pyramid in Giza,
is related by precise detail with the Speed Of Light?

Let us look at the following numbers.

When you go onto Google Maps you can confirm
that the coordinates for this pyramid, aka Pyramid of Khufu,
is 29.9792 degrees North latitude,
and 31.1342 degrees East longitude.

Scientist tell us that the speed of light in a vacuum
is 299,792,458 m/s. (A metre was defined in 1793 A.D.
as one ten-millionth of the length of the meridian
passing through Paris from the pole to the equator).

The chances of having the pyramid coordinates
to be precisely harmonically related to the speed of light harmonic,
is a marvel of mathematical investigation.

Next post: Bizarre Cloud Formation Over China Gives a Glimpse of a Celestial Kingdom