The Libra new moon on October 6, 2021 aligns with Mars. So the spiritual meaning of the new moon October 2021 astrology relates to energy, passion and initiative, but also anger and violence.

The October 2021 new moon also makes a difficult aspect to Uranus which brings impatience, radical change and rebellion. Added to this, the new moon and Mars join a star associated with aggression, destruction and terrorism. Asteroids aligned with the October 6 new moon point to any unrest or attacks being karmic in nature, or revenge.

The new moon on Wednesday, October 6, 2021, at 13°24′ Libra is joined by Mars. The planet of energy, action and passion can be useful. But the malefic planet Mars makes this is challenging new moon to start with. 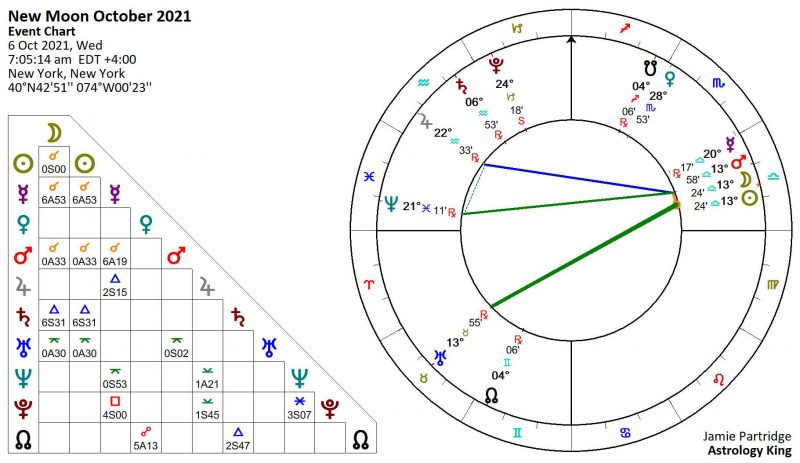 Sun conjunct Moon represents the end of one cycle and the beginning of another new 28-day cycle. It gives an invigorating burst of energy and initiative. But it also brings emotional balance. Not irrationally emotional, and not too cold and calculating.

You can question old habits, behaviors, and beliefs as you search for new ways to make progress. A new moon is usually good for making a fresh start. But the new moon October 2021 astrology suggests a high degree of caution is needed before jumping into the unknown.

New Moon conjunct Mars creates abundant energy, initiative and courage. But this new moon October 2021 energy must be used constructively, otherwise, there can be damaging consequences. If you let this hot energy build-up, it can escape spontaneously. The uncontrolled release of this hot energy is rapid and destructive. Irritation, annoyance, or impatience may lead to accidents, aggression, temper tantrums, even violence or rape.

So the best option is to consciously apply yourself to a positive form of activity. You have the potential to transform this highly charged energy into something constructive and productive, especially through physical exertion. With self-control and conscious awareness, you could also transform your raw, primal sexual desires into passion and romance.

New moon quincunx Uranus can make you nervous, tense and anxious. You might find it hard to relax as your intuition senses change or some drama is on the way. A buildup of electric energy in your body can feel exciting but also a little scary.

Pressure to change can come from someone with some power over you. Something unexpected may force you to change your routine, behavior or plans. An adjustment is needed whether you are forced to make changes or you find a different way forward yourself. So be flexible and very cautious, especially about taking risks. Unintended consequences would be extremely difficult to undo.

Mars quincunx Uranus gives a tendency to lose your patience then act rashly and impulsively. This can cause problems that mean you have to start all over again. You may lose your temper with too much boredom, restriction or limitation. Self-control is needed to stop your rebellious streak from getting in the way of your objectives.

As this tense energy builds up, you may start to feel agitated and restless. You must find a constructive outlet for this unstable energy through safe physical activity. But avoid taking risks or using dangerous machinery when angry. Be patient with electronics and computers. Don’t try to fix them yourself when iiritated. Most importantly, take some time between making a decision and taking action.

New Moon October 2021 is in the Sign of Libra. But as the star map below shows, it is in the Constellation of Virgo. This discrepancy is due to the precession of the equinoxes. It has moved the Sun Signs almost a whole Sign out of alignment with the Constellations from which they were named over 2000 years ago. 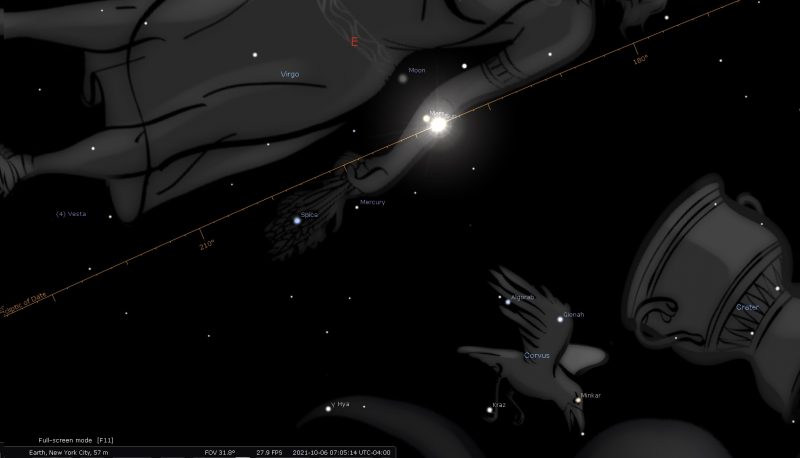 More specifically, the new moon and Mars align with a star in Constellation Corvus the Crow:

Fixed star Algorab is of the nature of Mars and Saturn. It gives destructiveness, malevolence, fiendishness, repulsiveness and lying, and is connected with scavenging. [1] Not a significant star when well aspected, but it can be a nuisance if aspects or planets involved are hard ones. [2]

If Algorab is in conjunction with the Sun, Moon, or one of the malefics, it has a reputation for accidents or injuries that are difficult to avoid. [3] Croatian astrologers call Algorab “Kill or be Killed”. It is associated with militant attacks, terrorism and assassination.

Below is a list of some of the countries that have conjunctions to Algorab in their national horoscopes:

Asteroid 269 Justitia was named after the Roman goddess of justice. She is the moral force in judicial systems, representing divine order, law, and custom. Justitia holds a set of scales to weigh the evidence. She also carries a sword to represent authority, and to convey the idea that justice can be swift and final.

Find Asteroid Karma in Your Chart

The October 6 new moon is one of the most dangerous moon phase I can remember. The main indicator is the new moon conjunct Mars. This is not a problem on its own, as Mars provided the energy and courage to reach your goals. However, the difficult aspect to Uranus and the aggressive fixed star will bring out the more destructive nature of Mars.

So the new moon October 2021 astrology indicates the potential for anger turning to violence. There is the danger of physical aggression, rape and murder. There may be protests, rebellion, terrorist attacks, cyber-attacks, assassinations, missile tests, and possibly even war.

The asteroids suggest and such events will have karmic undertones. That means they would be acts of revenge. But it also means these actions would be judged harshly and subject to swift retaliation.

The influence of the October 6 new moon lasts for four weeks up to the November 4 new moon. The best time for starting new projects is during the waxing phase of the moon, from October 6 up to the October 20 full moon.

If the new moon October 2021 astrology directly affects your Sign you can read about it in your free Monthly Horoscope. Finally, for more details about how it affects your natal chart see Sun Transits.