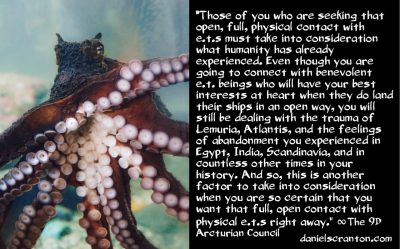 “Greetings. We are the Arcturian Council. We are pleased to connect with all of you.

We have evaluated several of the instances there on Earth where there has been open, physical contact with extra-terrestrial beings, and one of the conclusions that we’ve come to is that things have not ended well for humanity in the majority of those instances. We are referring to the time that humanity was assisted by the Lyrans, the time when humanity was deceived by beings known as the anunnaki, and we are talking about the instance in Egypt where several different extra-terrestrial races came to both assist humanity and also to take advantage of humanity’s view of extra-terrestrials.

So oftentimes e.t.s have been seen as angels or gods, and they have taken advantage of that belief that the humans held about them. When you have had full, open, physical contact with e.t. beings, more often than not, they have taken advantage of the fact that humanity assumed they were something other than what they were. And now, you live in a time where you are better served at questioning everything that comes to you in terms of information, stories, even firsthand accounts. You live in a time where it is very easy to put information out there that seems true, that sounds true, and even has some truth sprinkled into it, but that ultimately contains more of a desire to deceive than a desire to inform.

Those of you who are seeking that open, full, physical contact with e.t.s must take into consideration what humanity has already experienced. Even though you are going to connect with benevolent e.t. beings who will have your best interests at heart when they do land their ships in an open way, you will still be dealing with the trauma of Lemuria, Atlantis, and the feelings of abandonment you experienced in Egypt, India, Scandinavia, and in countless other times in your history.

And so, this is another factor to take into consideration when you are so certain that you want that full, open contact with physical e.t.s right away. Some of you think that the sooner this happens, the better. However, you are still working through your trauma of e.t.s as a collective. All of you were present during at least one of these instances that turned out to be quite traumatic for those of you who took part in those contact experiences. You are ready for that experience. Those of you who are receiving this message have done your work. You’ve cleared trauma. You feel ready for e.t. contact because you are, but you are a small segment of the human population.

The work is being done to ready your fellow humans, and you are doing a huge part of that work. Continue doing what you’re doing, and be open to having your own personal experiences with benevolent e.t.s. And just know that the rest of humanity is moving at a pace that is pleasing to those like us who can see the bigger picture here. We are the Arcturian Council, and we have enjoyed connecting with you.”