The Great Rite (Actual and Symbolic)

by Magical Recipes Online Blog Feed on May 1, 2019 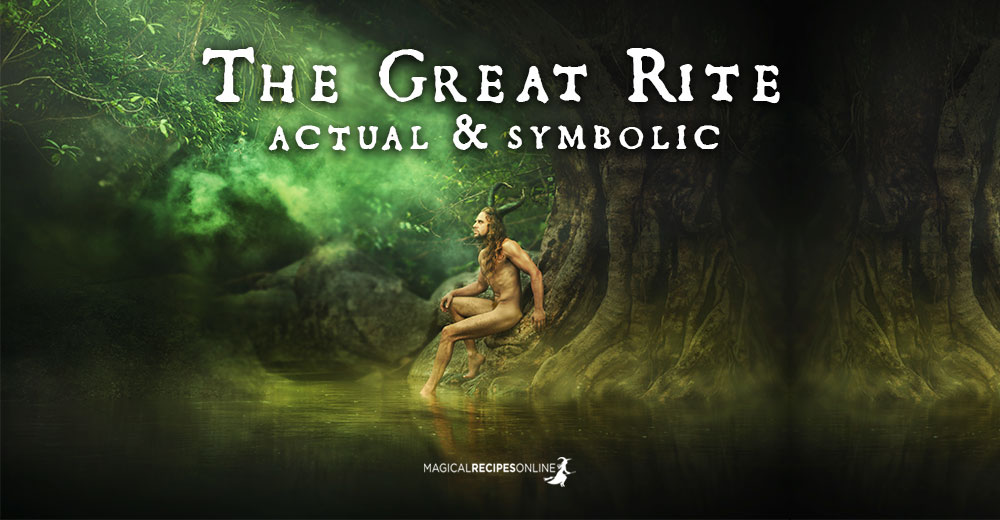 Beltane is a festival of rebirth and fertility and in Wiccan mythology Beltane is where the Great Mother and her young consort, the Horned God unite. It is this union that brings forth new life. This union is known as The Great Rite. It symbolises the sacred marriage, sexual union of the Goddess and the God (or Lord and Lady). The Great Rite is a part of many traditions in the modern Pagan community, celebrated by both solitary practitioners and covens alike. We’ve already seen its mystical and alchemical symbolism of the Great Rite. We were amongst the first who tried to remove the fog out of our Great Ritual of Witches. No darkness, no creepy sects. Just Magic!

⚠️ Please be aware this post contains information some may find offensive and unsuitable for under 18’s. Please proceed with caution ⚠️

The Great Rite can be preformed literally or symbolically.

The Truth about the Great Rite

In some modern cultures the attitude to sex is rather puritan, but for those in the Pagan community is simply a part of the cycle of life, a necessity for the continuation of life. In magickal terms the sexual act of union between two people is more than just physical gratification, it is much more. Sexual intercourse raises energy between the two participants, and then this energy can be used toward a desired goal. It is also a representation of the Goddess’s and God’s union, and is another method of worshipping and honouring the Divine energy.

Long ago, what has become known as the Great Rite used to be a physical act that would be done by priests and priestesses, but as time change so do the cultures and spiritual ceremonies. Today, The Great Rite can still be preformed as a physical union of a man and a women, it can also be represented symbolically by a chalice and an athame. Both forms of this ceremony are to be treated with the utmost respect (as should all your magical works), as they are both beautiful and powerful events that are revered by many in the worldwide Pagan community.

Sex is not Immoral

As with ANY ritual, the energy raised can be used for negative reasons, and can be abused. If The Great Rite is being preformed physically ALL the participants must understand what they are doing, what responsibilities they have within the ritual, and they MUST give their permission of their own FREE WILL. There is also an ethical side to look at as well, all participants MUST be willing members, as any participation that is forced is abuse. The participants must be willing and cannot be forced as this counts as intimidation and if forced…rape. To cause unwilling pain, terror, humiliation or rape are first and foremost illegal. Any mistreatment, bullying or disrespect of the participant will taint the energy that is channelled by the ritual. There are also legal aspect that must also be considered as well. Anyone that is partaking in the physical ritual, or taking part in the non-physical part of the ritual MUST be of or over the legal age (of the country that you live in). Those who are taking part in the physical union, must respect one another as people, and as the divine vessels they are representing. They must also keep in mind that they must not cause pain during the union, as this too desecrated the sacred energy.

I don’t think I need to mention this, but I will anyway. We live in an age of sexually transmitted infections and diseases, and other related medical conditions, so those taking part in a physical union, make sure you take precautions to ensure both partners are not going to pass on anything harmful. Also, if the participants are not in a relationship, make sure all precautions are taken to prevent unwanted pregnancy.

The symbolic sacred union of the Goddess and God is represented by using ritual tools such as an Athame and Chalice. The Athame is symbolic of the God and the Divine Masculine Energy, and the Chalice is symbolic of the Goddess and the Divine Feminine Energy. In a coven setting the symbolic ritual the High Priest holds the Athame, and the High Priestess holds the Chalice, and the High Priest then lowers the Athame into the bowl of the Chalice. If you are a solitary practitioner and with to do the Great Rite ritual symbolically, all you need to do is hold the Athame in your RIGHT hand, and hold the Chalice in your LEFT and do the same, lower the Athame into the Chalice. Just because you have chosen to symbolically represent the Sacred Union, doesn’t make it less sacred, or less powerful. It simply another way or raising and channelling the sacred energy.

Whether you are doing The Great Rite in a symbolic manner, or as a physical union (sexual intercourse), it is done inside a magical circle that you have prepared beforehand. The Great Rite is an expression of the Divine union of the God and Goddess, and as such the energy that is channelled through the act is a spiritual energy, and is to be contained within a magickal circle and must be returned to the Universe/Earth after the act is complete. Some covens chose to perform the symbolic version of the union as a group, and then 2 willing participant will perform the physical intercourse elsewhere in a private setting.

The actual ritual order of The Great Rite differs from coven to coven or from tradition to tradition. There are many variations of this ritual. There is no one uniform way, there is also no right or wrong way.

Please be responsible at all times, and respect the energy of this sacred union.

Previous post: What Does Your Most Dominant Chakra Reveal About Your Personality