Home » The Path Of Kundalini

The Path Of Kundalini

by consciousreminder on September 25, 2019 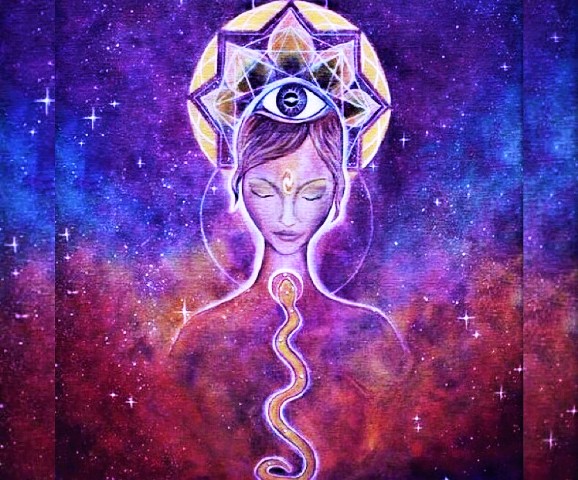 At the base of our spines, it lies sleeping and dormant, curled and coiled around Muladhara. It is Kundalini, the great and powerful serpent of Shakti. It lays waiting either for grace or for the being that it is in to awaken it by becoming conscious of consciousness.

There exist many methods of awakening the Kundalini including; meditation on the chakras, certain types of yoga, brainwave entrainment, and energy transmission from one whose Kundalini is active (this is known as shakti-pat), among any other ways.

A kundalini awakening can happen spontaneously and all of a sudden which can create many symptoms for the physical body which we will talk more about later in this article.

In most cases, however, it is a gradual and natural process which is occurring normally as we all ascend into the higher frequencies. And, it is beginning to happen on a grand scale.

For those of us who have been on this path for some time and grok that we are here to anchor in the light of the higher frequencies, it is for us to assist in this in any way we feel called to.

For many of us this simply means being authentic to who we truly are and allowing the light to shine through us. Just by the principle of entrainment, we will begin to awaken those around us.

The rising of our Kundalini energy assists in this greatly by helping to blast the debris from our energy centers so that as we process and clear our emotions; courageously feeling them and loving ourselves as they arise, they can pass through and more light is able to come in for us to anchor in, thereby raising our own frequencies by which we raise the frequency of the collective. And this is how we will ascend together, my loves!

In this article, we will talk a bit about what the Kundalini actually is, and we’ll take a brief look at the pathway that it takes, upwards through the body cleaning and energizing each of the primary chakras along the way. We will discuss its destination and purpose and finally go over some of the more common symptoms that many people experience.

Whether it is a spontaneous awakening or something one is working towards on the spiritual path; it will generally not go unnoticed. Even if one is totally unaware of all things spiritual, if/when this happens, they still are likely to have several inexplicable (to them) symptoms in the body.

The word Kundalini is a Sanskrit word which means coil. It is symbolized as a coiled snake and lies dormant at the base of every human’s spine forming a three-and-one-half looped coil.

These days, as Eastern wisdom is becoming more available in the West, more people are learning about the Kundalini, but for a very long time it was mostly familiar to the spiritual seekers, yoga practitioners, and mystics for the most part.

First it should be seen that the awakening and the journey within of the Kundalini is not the same thing as spiritual enlightenment or Self-realization (two words pointing to the same).

It also is not a prerequisite; many people have awakened completely, remembering fully their true nature and their Kundalini slept through the whole thing and is still zonked out!

Enlightenment or awakening is simply remembering what we are. It actually is the most simple and obvious thing in the world; once it is clearly seen, that is.

That said, oftentimes awakening your Kundalini will result in complete Realization, but it is not necessary. However, it is an amazing beyond words experience that will transform one’s entire being and will most assuredly bring about transcendence of some kind.

There are at least seven-billion ways that it is possible for this to occur. We all have a unique perspective yet; we are one consciousness seeking to know itself by perceiving through every individual experience.

As humans, in this way, no two experiences could be exactly alike. Sometimes it happens very quickly; all at once energy may be felt shooting up the spine. And the opposite can also be true; it sometimes is a long and drawn-out process.

So, what is it that actually happens? Well, in order to understand the process, we will first need a basic introduction to our chakra system. Chakra is a Sanskrit word which means wheel. They are actual energy vortexes that move prana (life force energy) through our bodies along energy channels, known as nadis.

There are thousands of these wheels spinning throughout our physical body and our energy field (aura). But for the purpose of our investigation, we will look only at the seven primary chakras.

Each of these plays a vital role in the health of the physical body because they regulate and control our glands. And on the level of consciousness, they connect our physical bodies to our etheric bodies, as well as to the higher dimensions.

The serpent begins its journey by awakening and moving from where it has been coiled around our root chakra. Red is the color here at our base and this also is identified with stillness.  Located at the base of the spine or perineum, this is our connection to the Earth’s energy. Muladhara being healthy allows us to stay grounded and balanced.

The next chakra that Kundalini will cleanse, balance, and electrify on its upward trek is known as the sex chakra or Sacral. It is located at the between the lower abdomen and naval, and when balanced is our source of creativity and sexuality.

It is orange and as Kundalini moves through one generally experiences deep feelings of being in the flow and enhanced feelings of well-being will abound.

We now reach the brilliant yellow Manipura. This is our power chakra. It is to be found at the solar plexus and governs metabolism and digestion. When this chakra is out of balance one might experience lethargy and shakiness as well a diminishing of self-confidence.

As the Kundalini energizes this chakra, often an enormous increase in intuitive knowing will take place. Those first three chakras are referred to as the lower chakras and relate to earth energy and elements.

At the middle point, Kundalini will encounter Anahata. Our fourth chakra is the heart center. It isn’t located at your physical heart; it is actually right in the middle of your chest. It is a beautiful, whirling wheel of gleaming green.

Relating to unconditional love and acceptance, when fully open, Anahata will free one from the chains of ego. It also rules our emotions and is the meeting point of the earthly energies of the first three and the multi-dimensional, spiritual energies of the last three.

Vishuddha is the first of the higher three chakras. Located in the center of the throat, where an Adam’s apple would be, the fifth chakra that Kundalini will ignite governs our ability to communicate our truth clearly. It also is in charge of our thyroid and parathyroid glands.

It exudes the energy of blue, a very bright blue. As the serpent engages Vishuddha in its energetic dance a purification of the mind will take place, as also will a process of rejuvenation. This is known to the sages as the fountain of youth for that reason (Andov, 2007).

We have finally made to what Descartes referred to as the seat of the soul. The third eye is also called Ajna, is a very deep indigo, and is right between your two physical eyes (Farr, 2003). The really amazing thing is that in that exact spot deep within our brains, located between the left and the right hemispheres on the corpus callosum is actually an eye.

Known as the pineal gland; it has the entire cell structure of a human eye. Thought by many scholars to be a vestigial eye; this is an endocrine organ which got its name because it is shaped like a tiny pinecone. When healthy, this little gland is about the size of a grape and is our connection with our psychic abilities and higher perceptions (Russa, 1998).

As we get older our connection with the Universal force fades due to socialization and conditioning; as well as the fluoridation When this happens the pineal gland begins to atrophy, shrinking up like a shriveled raisin.

When Kundalini reaches it the actual gland physically plumps back up into a grape, but the most marked effect is the dissolution of the illusion of separateness and clear seeing of higher Truth.

Now that our snake has opened our third eye and activated our pineal gland; the next stop is the biggie, ladies, and gentlemen. The crown chakra explodes with the blinding purplish, silvery-white almost non-color of the brightest blacklight ever imagined. Sahasrara greets Kundalini with an explosion of consciousness akin to the big bang!

This is Realization of the Absolute and the true meaning of yoga. The purpose of this is the joining of our Divinity with our physical selves. After this occurrence, everything is still the same but seen from a different place; from a different consciousness. Indeed, this is one of the most miraculous methods that consciousness employs in order to evolve.

As stated earlier, no two experiences will be exactly the same but there are several similarities shared by many. It is fascinating to note that this is becoming more and more common. There are numerous accounts from all sorts of people, spiritual seekers and skeptics alike, describing spontaneous Kundalini awakenings leading them to spiritual enlightenment.

Some of the most common symptoms of this include tingling or tickling and heat moving up the spine. Sometimes the actual cleansing of the chakras is felt. When Kundalini reaches the upper chakras, especially at the third eye there is often a sensation as if the brain is being washed with energy (Mehta, 2010).

Sometimes there is a headache or pressure in the area of the third eye, if the pineal gland was extremely calcified, the headache would be worse than if you had a healthy pineal gland.

Often there is some discomfort because the body isn’t really accustomed to housing such massive energies, but that does not last as our bodies, (and our minds), adjust to this very quickly. It is, after all, a return to our natural state and that carries with it the deepest peace and beautiful states of ever-deepening bliss and awareness.

It is often said that our truest and most profound purpose on this Earth is to remember that we are all one Divine being, separate from nothing, even while we are in individual bodies. We have reached the end of the search only to find out that what we have been searching for all along is actually what we are. We are that.

The post The Path Of Kundalini appeared first on Conscious Reminder.

Next post: Tantric Numerology – How It Can Be Used To Reach Your Higher Self?

Previous post: Amber is So Much More Than a ‘Stone’ and These Are Its Properties