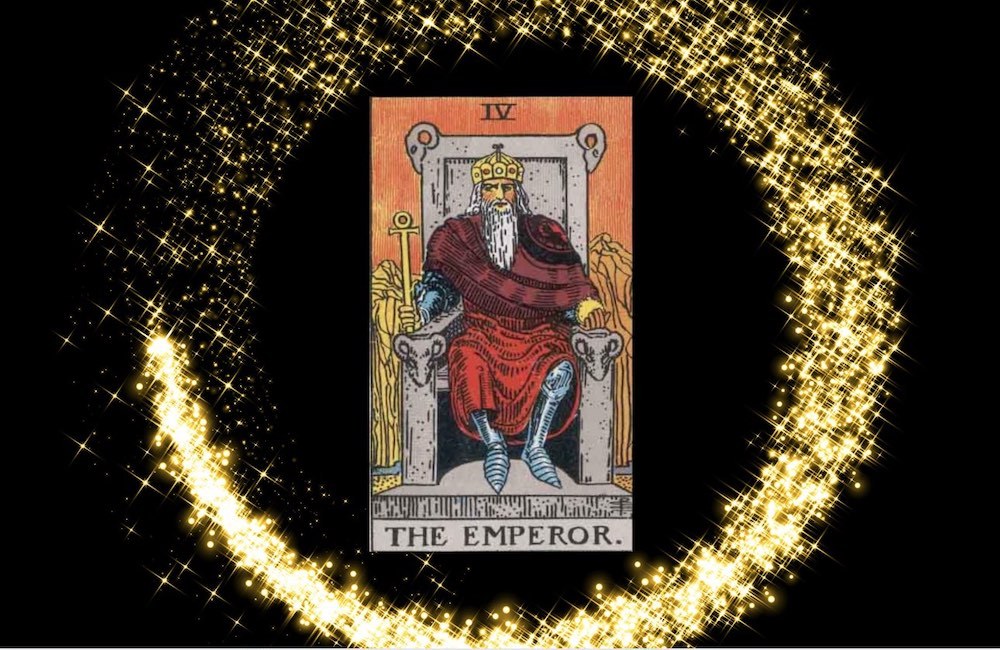 The Emperor seems such a formidable character as he sits sternly on his throne high up in the inhospitable mountains. It seems so unlikely that he is partner to our earth mother, The Empress, but, like Ying and Yang, they compliment each other.

The Emperor conveys authority and power. How would you feel if he appeared to you in a reading? Have a look at the card and see what part of it you are drawn to.

Is it the harsh terrain he lives in, or the throne adorned with ram’s heads? (The Emperor is assigned to the sign of Aries which is why they are there.) Do you feel drawn to the bold red cape he wears or are the glimpses of armor hidden underneath the cape taking your attention?

The Emperor, as with his Aries star sign, is linked to the planet Mars, as you spend time looking at him do you feel that fiery energy within you? Is it making you feel courageous or a little intimidated?

Everyone who looks at the card will feel drawn to an aspect of it, no matter how small or random. Often, many who see this card do not feel that its’ personality or traits are linked to them at all.

Traditionally this card is seen as a father type, a leader or authority figure of some kind. I have seen people who have had readings with me shake their heads and announce, “Ooh no, that’s definitely not me”, and as they do so, I see the stern look of The Emperor’s gaze laying in front of me who is urging them to think again.

The Emperor is a very masculine energy, he sits with authority on his throne very much in control of his surroundings. The armor that he is wearing suggests that he has had to battle to get to where he is and that at any moment he would be prepared to do it again.

Linked to Mars, the Roman god of war, he is certainly not a force to be reckoned with.  A leader, a ruler, and completely in control.

This card is also assigned the number four, a number which denotes stability and a very strong, solid place to have reached. There is nothing shaky or unreliable about the Emperor.

As I mentioned before, there is a little of The Emperor within all of us, although many of us may not feel like it. Remember, although The Emperor has courage and determination to get what he needs, he will not go into battle needlessly, a good leader plans, co-ordinates and has a great strategy. He will not rush in without thinking.

If we are not ready to face our own battles then The Emperor within us may well sit back quietly and wait for us to find our power again.

Sometimes in our lives, if we are confused, feeling lost, disillusioned or like we have our own mountain to climb, we could not feel less Emperor-like if we tried. But, this is when we need to call on the strength within us to get the courage to deal with the inhospitable situation that we find ourselves in.

The Emperor’s success with his throne on his lonely and barren mountain top, shows us that he has overcome obstacles to get where he is – and we can too.

There are times in our lives when emotions and intuition are what we need to feel our way forward. But, The Emperor is showing us that there are times when we need the logical part of our brain, coupled with courage, determination, and a well-drawn up plan of action.

So, think back to what you were drawn to when you looked at this card, and write down some reasons with your logical brain why you thought you were drawn to this aspect. Be it the armor, robe, throne, environment, or crown or something completely different.

Remember, the Emperor may seem a bit intimidating and stern, but, he is there for the highest good for all of us, he is the Tarot character that gives some much needed paternal advice to our young Fool as he travels on his life path. And, he is there for you too, to do the same.

His lesson is to teach us that we should all have the courage to be in control of our own destiny.

Take some time to imagine how it will feel to journey to the top of your very own mountain of dreams. Logically think about what your own action plan is for your life’s journey and steps you need to take to get there. And take comfort in the knowledge that we all have the passion and determination of The Emperor within us, and when you find it, there will be no stopping you!

Previous post: 9 Characteristics of Spirit Warriors, Are You the Chosen One?