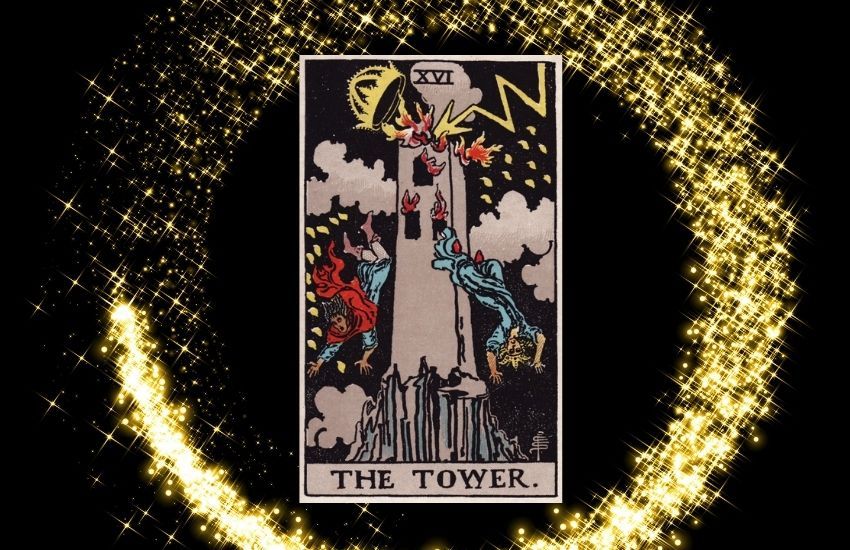 The Understanding Tarot series is written by Claire Chilvers. It follows the Fool’s journey through the Major Arcana. You can find out more about Claire’s insights and readings at @ClaireChilversTarot

The Tower – A Lesson in Chaos

If The Fool’s Journey were a film and we were watching The Fool pass through all the situations and events that have unfolded in the last fifteen tarot cards, it would be no surprise when the events of The Tower become the biggest, dramatic scene yet.

Because, like in a film, there have been subtle hints along the way that the protagonist was leading to an event that would test every part of their being.

We have watched the young Fool grow up and be given his life lessons from his teachers and role models, find love, ambition, challenges, strength, and loneliness.

In ‘part two’ of the film (or the second cycle of the Major Arcana as we know it), we’ve seen fate (Wheel of Fortune) put The Fool in a new situation, and warnings that he needs to be true to himself (Justice), acceptant of his fate (The Hanged Man), willing to adapt to change (Death), be at peace with himself (Temperance), and lastly to face his biggest fears and face his demons once and for all (The Devil).

If you had paid good money to go to the cinema and watch this film you would be waiting with anticipation to see what unexpected event is thrown at this central character, and (hopefully) willing them to draw on everything they have learned and turn their life around to something even more incredible than they imagined.

As I have begun to write this, it has occurred to me that my family’s favourite film has exactly this plot, and with Christmas approaching it seems very relevant –  ‘It’s a Wonderful Life’.

‘It’s A Wonderful Life’ essentially is about a man who finds himself at his lowest ebb on Christmas Eve. Believing that everything he has worked so hard for is lost and, facing bankruptcy, he contemplates suicide.

It reflects the very essence of how The Tower card can suddenly appear and shake us to the very core of our being. But, as I alluded to above – it is this test of his character, this unprecedented situation that he finds himself in which makes him draw upon everything he has learned about his character and move on to find a higher, more complete version of himself.

In this film, the main character, George Bailey, isn’t alone when he does his soul searching- he meets his guardian angel, Clarence, to guide him through this troubling period and back towards the light.

Much like this beautiful film, The Tower card is subtlety reminding us we are not alone – no matter how hard the situation is.

In amongst the terrifying scene depicted on the card of people being thrown out to the rocky ground below, and lightning striking the isolated tower, we can see flames destroying the building. But also small flames following the two people.

There are twenty-two of these tiny flames and, I feel, these represent the twenty-two Major Arcana cards, reassuring us that the Universe is (and always was) guiding us through every situation – good or bad.

Having these little flames of energy in the card serves as a good reminder that all the cards are connected.

The Tower is showing us a dramatic ending, one that will affect our spiritual, mental, and physical worlds – but this is the lesson it has to teach us, just as all the other cards have a ‘job’ to teach us some aspect of our human and spiritual life.

But, this is a harsh lesson, shown often by the abruptness of it. Signified by the lightning strike – our lives can change in a flash, which can be an immensely stressful, heartbreaking, or anxious experience and one where we feel there is nowhere to turn.

But we do have something we can rely on in these moments – ourselves. We all have that Guardian Angel living inside us – our very own ‘Clarence’ – we are a divine being whose energy is centered around love.

When The Tower presents a situation in our lives, love does not always seem relevant, visible, or even possible.

Chaos is the overwhelming factor here and there is not always time to show, receive, or even imagine love during this time.

Examples of this would be loss of a job or business, the sudden death of a close friend or family member, being involved in an accident, or a natural disaster that causes havoc and devastation to your home and community.

The crown shown in this card can symbolise material possessions being cast aside, but, also the crown chakra – which is our link to the Universe and spiritual world. Many people in times of trouble feel that this part of them has also left them and feel more alone and desperate than ever before.

But, chaos is a part of the human experience and is a catalyst for change like so many of the lessons The Fool has learned along his journey.

In truth, it is probably the least favourite of all our ‘change’ experiences (for instance falling in love, becoming a parent, receiving a promotion, and winning the lottery are all ways ‘change’ can come into our lives, which we may prefer!)

Devastation and heartbreaking chaos would probably not be chosen by any of us – but sadly it is something we all experience.

The year 2020 has amplified chaos and change like no other year in a generation. But, it has also amplified love, kindness, compassion, solidarity, and community too. Which gives us both aspects of our tarot card.

Out of the darkness, we find ways to shine light. Just as night follows day. After the chaos, comes love.

Eventually, once The Tower has rocked our world, created a void and changed our perception of all that we knew as ‘normal’, there comes the obvious question of what now?

Unfortunately for us, that is not the question The Tower can answer. That is not its’ lesson to give.

We need to move to the next chapter, The Star, to find that out – which in itself is another lesson that we don’t stay at this chaotic point forever.

The Tower is only one scene during the film script of our life – it is not the end.

This article is dedicated to my much loved Nan, Doreen Price, who passed away on 21 November 2020, aged 92. You will be forever in my heart.

Previous post: Extraterrestrial Abductions – Why Are They Done on Humans? Anéeka of Temmer – Taygeta – Pleiades