Understanding Tarot: The Wheel of Fortune 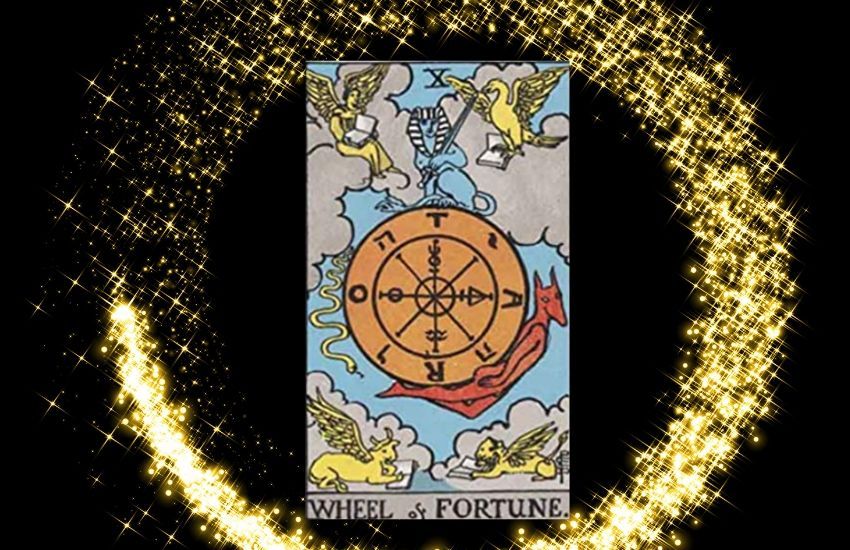 Trusting the outcome and going with the flow

The Wheel of Fortune is the midpoint in the Major Arcana cards. It is card number ten and within numerology, tens denote an ending of a cycle and the beginning of a new one.

This cyclical card with its never-ending wheel turning around and around is a very good symbol of this point.

To look at this card can be very confusing. What on Earth do all those strange creatures represent? Why are they sitting there reading books? Why are there no people in the picture (unlike all the other Major Arcana cards?)

In a reading it is equally frustrating, with groans of despair when it arrives and questions such as; “Where am I on the wheel – on the way up or way down?”; “What is it that is going to change my life so suddenly?”; “What can I do to change this or is fate going to start ruling my life?”

Many people find this card unsettling because, put simply, it is so uncertain – and us humans, well, we are not very good with uncertainty and rarely see it as a positive!

People consult the tarot because they want to understand what is going on in their own world and require clarity, assurances, calmness, and order.

To have The Wheel of Fortune arrive in the middle of a card reading, may leave you wishing you could ask for your money back!

But, before we focus too much on the card’s negatives aspects, let us remind ourselves that all the cards are neutral, and have both positive and negative attributes.

Although, that can be difficult to see if the only clarity it gives you is that things are out of your control.

Remember that The Wheel of Fortune is a small part of the journey of the Fool as he passes through every card on his way towards the successful completion of his human life.

The Wheel arrives just at the point where he has grown up. We last saw him when he had taken some time to reflect on all that he had learned from his mentors and the early part of his life.

He left card number nine, The Hermit, with a renewed picture of who he was and wishing to continue on his journey to fulfill his purpose.

With this in mind, it is the perfect time for the Universe to send him a challenge – they would not do so if they did not think he had gained all the abilities and wisdom to cope.

The Universe is urging him to jump on that wheel, embrace the challenge, face the adversity, hold on tight, and let them turn his life around until he is perfectly placed to continue on to the next phase of his life.

Unfortunately, however, when the wheel turns it can be unsettling. If we are not in control of where we join it or when we are going to be allowed off of the spinning wheel, then that in itself is a challenge.

But, the positive with this is that these are the times when we do not have the time to worry or overthink, we just have to trust all will be ok and go with our gut feelings.

We usually find when the Universe throws us this challenge, we are able to draw on our unused strengths and abilities we didn’t know we had to achieve more than we ever thought possible.

And, when we stop spinning, we find ourselves in a much better place and one we wouldn’t have dreamed of being in had we followed our own ideas.

Once again our tarot journey that I am writing here is playing out in real time and has mirrored the ups and downs that we have all been witnessing recently.

As we are working our way through an intense Eclipse Season it seems that the world is willing us all to change and move on to a new cycle.

But, as we have all clung on to the wheel as our world has been spinning – seemingly out of control – I am aware that some people may have felt that their lives have plunged into darkness, yet others may feel positive and enlightened by the changes they have seen, and a vast majority of people may have no idea at all whether they are up or down!

So, let us look now at the abundance of symbolism that this card offers us.

As an exercise, firstly ask the card for guidance and then take some time to have a look at the card and see what you are drawn to – you don’t need to know what the images are, just let your eye wander and see what resonates.

We will all be drawn to something different, as we are all on different journeys.

Have a look at some of the explanations below to see if the symbol you have been drawn to resonates with you, (you may even see the symbol -or something that relates to it –  as you go through your daily life, especially if you are asking for help and guidance through this confusing time).

Lastly, I will mention the Wheel of Fortune is also assigned to the planet Jupiter.

Jupiter has many aspects assigned to it, but, I often feel that the qualities of optimism and growth, which it is linked to, could be very valuable when we see this card.

Wherever you see yourself on this Wheel of Fortune remember that you will not be there forever and that this too will pass.

If you are riding high, be grateful and enjoy the moment. If you are at the lowest point, even if it feels you are stuck, the wheel will soon move you out of the darkness. And as you can see by the abundance of characters that surround you during this time, you are never on this journey alone.

Previous post: How You Can Process Grief – Learn How to Heal from Loss