Home » What is Rainbow Topaz? Meanings, Formation and Powers

What is Rainbow Topaz? Meanings, Formation and Powers

by AtPerrys Healing Crystals on September 15, 2019 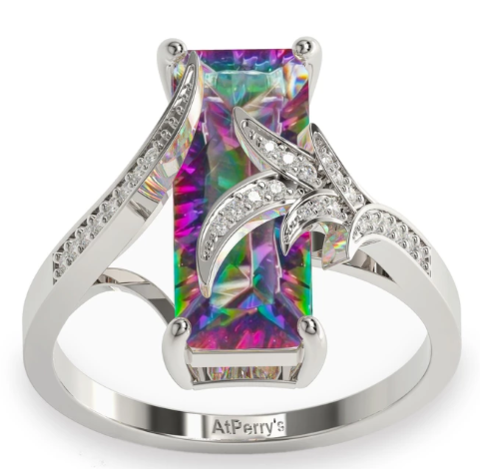 A beautiful manmade stone created by working on a natural gemstone called topaz, rainbow topaz is a gorgeous stone. It shows a rainbow iridescence that makes the wearer look charming and charismatic. Rainbow mystic topaz is a powerful stone that is considered ideal for luck and harmony too. Today we will learn all about the beauty and metaphysical attributes of rainbow topaz. Ready?

What Is Rainbow Topaz? Popular as mystic topaz, rainbow topaz is a manmade gemstone and not just a trade name. It is produced when white topaz gem undergoes PVD (physical vapour disposition) or surface coating with metal titanium. It is a beautiful topaz with upgraded mystery holding within the stone.

What Does Rainbow Topaz Mean?

Topazoz is a unique word that roots from the island Topazos where the Greeks first chanced upon the stone. Rainbow topaz meaning is mystery and magic. It will reveal the hidden potential within you and fun lurking in your life. Topaz rainbow works on the spirit just as the eyes!

What Color Is a Rainbow Topaz?

A beautiful stone like rainbow topaz has not just one color but seven or more due to its rainbow iridescence. You will find predominantly blue, pink, red, purple and blue rainbow topaz stones in the world today.

What Is the Difference Between Mystic Topaz and Rainbow Topaz? Take it any which way, mystic topaz and rainbow topaz are one and the same stone. They are named differently by traders. Both are the same manmade stone treated with titanium vapors to create a rainbow sheen on it. If you come across a mystic topaz, remember it is called rainbow topaz too!

Rainbow Topaz What Does It Represents

Rainbow topaz represents joy and magic in life. It is a reminder of the charm and charisma we carry within ourselves. It accents ones own personal style and brings out memorable habits to the surface. It is a stone of harmony and good fortune. The stone attracts good luck!

How To Say Rainbow Topaz In Japanese?

The pronunciation of rainbow topaz in Japanese is Reinbōtopāzu, written in Japanese as レインボートパーズ.

What Is a Rainbow Mystic Topaz Ring?

Where To Buy Rainbow Topaz Jewelry? How Is Rainbow Topaz Made?

Made as a result of physical vapour deposition also called PVD, white topaz natural stone is coated with the reflective coating just like the one you see on your sunglasses. The titanium vapors are further used during the production of rainbow topaz making the iridescent sheen.

Found out everything you need to know about rainbow topaz? Ping us down for more!